International Loch Teams:
7plus7 Construction, the Lake of Menteith Fishery and Fishers are the main sponsors of the Spring and Autumn International Teams in 2017.  7plus7 Construction and Fishers have provided support for the teams since 2011 and this is the ninth year that the Lake of Menteith has sponsored the teams and we are grateful to them for their continued support. The funding provided by them will be used to reduce the costs that would otherwise have to be paid by the individual team members.
The Fishers website can be viewed at www.fishersdirect.com
The Lake of Menteith website can be viewed at www.menteith-fisheries.co.uk
The 7plus7 Construction website can be viewed at www.7plus7.co.uk
The teams are also sponsored in 2017 by Principal & Prosper, Angus Angling, Steadfast Scotland, Gallery Fishing North Esk, Travis Perkins, the Malcolm Group, St Andrews Timber & Building Supplies,  MGM Timber,  Bruce Stevenson Insurance Brokers,  Bell Donaldson Steele, Magnet,  The Edinburgh Mortgage Company Ltd., McKenzie Skip Hire,  N Hogg Joinery and Middlemiss Embroidery Ltd . The sponsors websites can be visited by clicking on their logos.
International River Team
The 2017 International River Team is sponsored by Fin and Game, Kelso,  7plus7 Construction and Flybox.   Their websites  can be viewed by clicking on their logos.
Scottish National Trout Fly Fishing Championship
The 2017 Scottish National Trout Fly Fishing Championship will be sponsored for a fifth year by Ridgeline UK. The Ridgeline products can be viewed by clicking on the Ridgeline logo. The hook/fly measures used in the National are provided by 7 Plus 7 Construction and the paper used for the catch returns is provided by R & E Hygiene.
Scottish Club Championship
In 2017 the Scottish Club Championship will be sponsored by Snowbee,  the Loch Lomond Group, The Lake of Menteith and Fly Tying Scotland.  The hook/fly measures used the Scottish Club Championship and the Champion of Champions are provided by Keir Hardie Joinery.
Champion of Champions
The Champion of Champions will be sponsored in 2017 by Snowbee. The Snowbee website can be visited by clicking on their logo.
The SANACC Committee wish to thank these sponsors for supporting our teams and competitions and it would be appreciated if our members would in turn support them.
Flybox Raffles
The Spring and Autumn Teams are tying flies which will be put in two presentation fly boxes each of which will contain 140 flies. These boxes will be raffled during the 2017 season with raffle tickets for the first box being available at the National Championship Heats prior to the Spring International and tickets for the second box being available at the semi finals prior to the Autumn International.
Fundraisers
The Loch Teams wish to thank the following organisations and individuals who sponsored pegs or provided prizes or support for the fundraisers. They also wish to thank all of the anglers who attended the fundraisers.
Prizes & Support Povided By:  Fishers, Angus Angling, Malcolm Group, Wychwood, Airflo, Scierra, The Rose House, R & M Distribution Ltd, Lake of Menteith,  Markle Fishery, Flybox, FritznFlies, Seamous Kelly, Frozen North Fly Fishing, Gleneagles Shooting & Fishing School, Anglers Creel, Fario Flies, Alex Dewar, Paul Barr, Joe Beattie, Aaron Philips and Mrs Mackenzie.
Autumn Team Flybox Raffle
The draw for the raffle of the presentation box of flies prepared by the Autumn Team was done by Douglas at the Lake of Menteith after the weigh-in for the semi-final there on 30th June.
The box was won by Ross Wilson of Earlston AA.  Ross qualified for the semis at the first National heat and opted to go to Carron for his semi-final but unfortunately did not make it to the final.
The Autumn team wish to thank all of the National competitors who bought tickets in the raffle.
photo:
Ross with the presentation box of flies 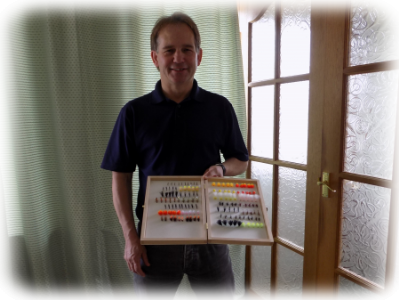 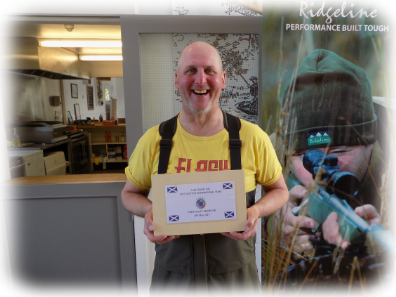 Flybox Raffle
Spring Team
The draw for box containing flies tied by the Spring Team was done on 9th May after the the weigh-in at heat six.  The delighted winner was Darrell Young of Blackbull FFC who was taking part in the National for the first time.  Darrell narrowly missed out on qualifying from heat 6 but with those flies he must have a good chance next year.  The Spring Team wish to thank everybody who support the raffle.
The raffle for the box containing flies tied by the Autumn Team will start at heat 8 at Loch Leven and will continue through to the last of the sem-finals.
Malcolm Group New Haylie Fundraiser
26th February 2017
The last of our three competition fundraisers, the Malcolm Group New Haylie Fundraiser, went ahead on Sunday 26th February.  To say that the day was wet and windy was a bit of an understatement however as if in a thank you to the competitors the sun came out when the final whistle was blown.
George and Senga made all the competitors welcome and provided a lunch along with tea and coffee throughout the day.  Once again Mrs Mackenzie provided delicious cakes.  The event was organised by Alan Gilbert and Alan Hill and the sponsors, Malcolm Group, were represented by George Scott who presented the prizes at the end.  The teams wish to thank the Malcolm Group along with George and Senga at New Haylie Fishery and everyone who donated prizes for their help in making the day a success.  They particularly want to thank the competitors for taking part.
The fish were to be seen on the top for much of the day and a total of 103 were caught.  Top rod was Kevin Andrews with 13 fish.  James Hek was second with 10 fish and Scott Aitken was third with 8. 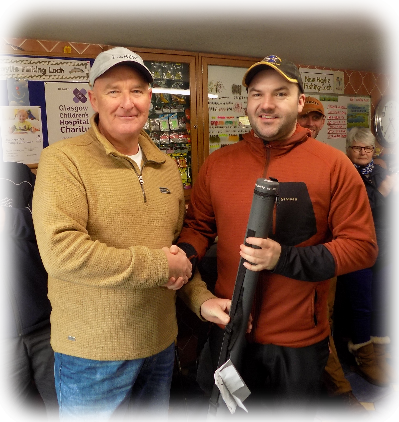 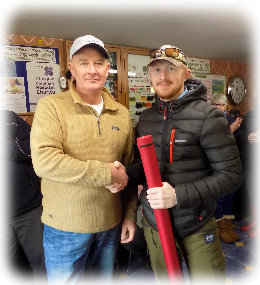 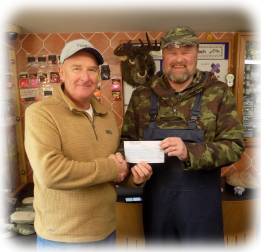 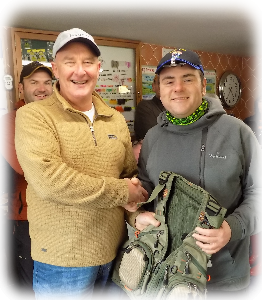 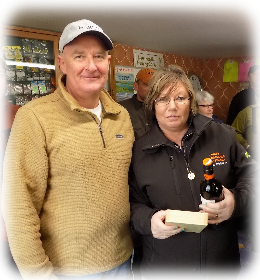 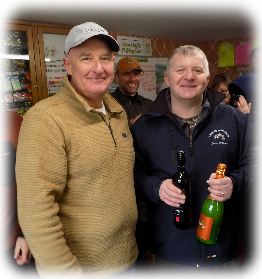 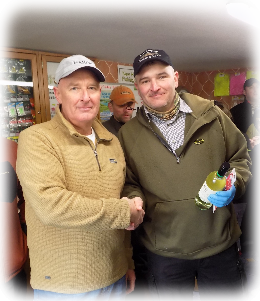 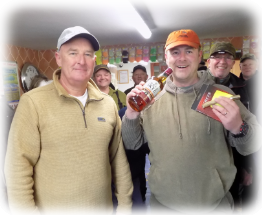 Brian Mackenzie
Spot prize
Parkview Fundraiser
Saturday 18th February - Parkview Fishery
Once again Wullie Simpson organised a fundraiser for the teams at Parkview Fishery and Jimmy and his staff there provided an excellent lunch and made sure that there was a warming cup in the lodge throughout the day in case anybody needed it.  The weather was a good deal kinder than the week before and the trout were numerous and willing to be caught.  The Spring and Autumn teams wish to thank Wullie and Jimmy for making the day enjoyable and successful.
Top rod on the day was SANACC Chairman Jock Kettles who came with a rush at the end with a count of 14 fish.  Heavy fish counted double and there were quite a few to be seen.  Paul Watt had the heaviest fish of the day which weighed 10lb 8oz and took the second spot with his 13 fish.  Michael Low netted a beauty at 10lb with Jock Kettles netting one at 6lb 8oz and Andy Dunn bringing in one at 4lb 8oz.
Andy Dunn was third with 12 fish and Ronnie Gilbert was fourth with 11 fish. 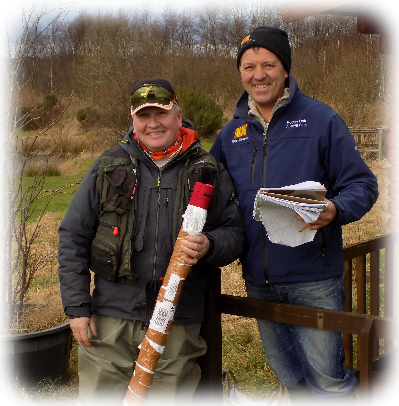 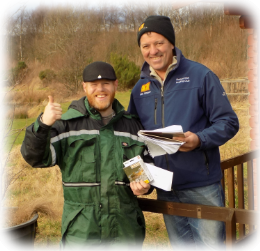 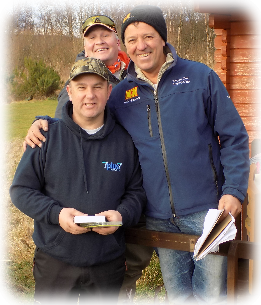 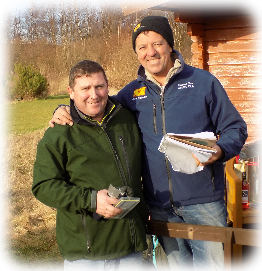 Jock and 6lb 8oz trout
Scottish Loch Teams Fundraiser Cup
Markle - 11th February 2017
The annual fundraiser for the Scottish Loch Team Cup was held again this year at Markle Fishery and once again Jonathan Swift and his staff there went out of their way to make sure that everybody was well fed and that there was a constant source of tea and coffee to warm those that were feeling the chill. A tremeandous array of items had been donated to ensure that there was more than enough to go to the prize winners, auction and raffle.
lunchtime at Markle 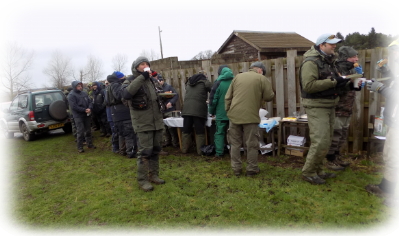 It was a cold day with a biting wind and occasional rain which made the fishing difficult and kept the fish hard to find. Fifty four competitors took part and the teams are indebted to them for making the day a success.  Jock Kettles organised the day and along with his helpers he made sure that everything ran smoothly. 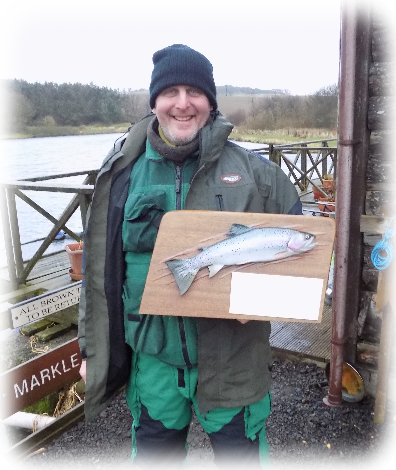 A total of 91 fish were caught and the top rod on the day was local angler Darrel Young.  Darrel netted six fish with his first being caught at 10.30.  In second place was Stevie Whitehead with 5 fish with his first fish being netted at 11am.  Brian Mackenzie also had 5 fish but with his first fish being caught at 11.10am he had to settle for third place.
The first fish of the day was caught early on with Chris Harkess netting it at 9.31am
photo:  Darrel with the trophy
Three trout had been tagged and there was a bottle of whisky as a prize for each of the anglers that caught them.  These three fish must have realised that there was price on their heads and they evaded capture.  The starting peg number for each competitor was put in a bag and three lucky anglers who had their numbers drawn won the whisky. 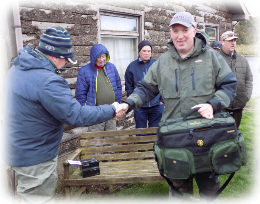 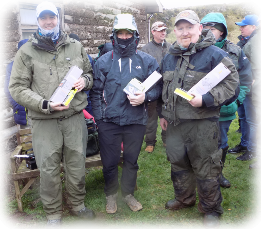 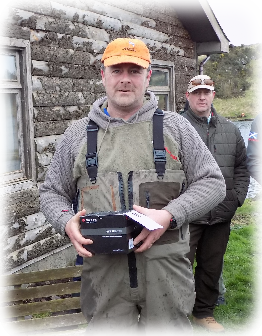